A Word From the Editor in Chief

Bijou here.  I usually give my female pet free reign over posting here.  However, as I am ultimately responsible for the content of this blog, I feel the time has come for me to step in and set the record straight.

Last week, The Female and The Male decided to do something strange.  They refer to it as "making the craft / office room".  The Female has a sizable desk in the other room, so I am curious about why she needs another for an "office".  She should know that she already has a job.  Her sole purpose is to take care of and entertain me and Lou.  I mean really, what good are pets anyway if they can't do those simple things???  But I digress...

They set about dismantling and moving a great number of things in this room.  Including sliding a perfectly good countertop system into the center of the room!  Then they rolled up the nice soft rug to expose the slippery wooden floors (don't they know that it's hard for us to walk on such slippery surfaces?  These pets are not very intelligent, but I love them)


Then The Male did a very strange thing.  He went and got the spray bottle that The Female uses to mist us.  He sprayed the wall and got it wet.  (I was watching carefully in case he was just faking me out and was really going to spray me!)  Then he wet down this stuff called "wallpaper" and - you'll never believe this - PUT IT ON THE WALL.  Who ever heard of such a thing.  They should have just let me chew it up and give it a few good rips on the edges.  It looks far too straight for my taste. 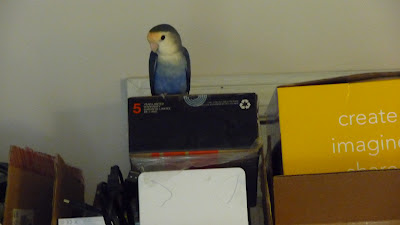 I chose to supervise from on top of a shelving unit, perched safely on top of a box up there where I was hard to reach, but had a great view.


They repeated this over and over, eventually stopping to (finally) make dinner.  Here's what the room has looked like since Sunday.  These pets sure take a long time to finish things.  Not like us respectable parrots.  If we are going to do something, we get it done! 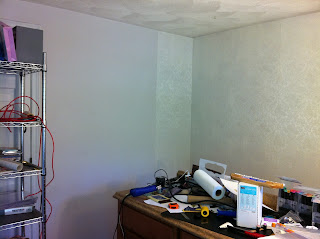 You can see the edge of the shelving unit that I chose for my supervisory duties.  This room used to be the nest for The Female's oldest hatchling, another female.  I wasn't allowed in there because she had too many necklaces and earrings and other goodies that the hatchling wouldn't share.  But sometimes I was sneaky and got in there anyway.  It was loads of fun. 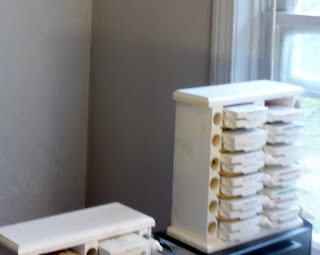 Here's a picture of something called a "Stamp Pad Holder" that The Female's Father made for her.  She claims that it is very valuable to her and won't let me chew on the edges of the wood.

The holes in the side are too small for me to crawl into, so I don't really get the point.  She puts these things called "reinkers" into them.  I like to roll those "reinkers" around and it's especially fun when they roll off the desk.  That really gets her attention!


So, now you know what's REALLY been going on around here.  It's not excuse for The Female to be slacking on her writing duties.  Rest assured, I am taking her lapse very seriously and she will be reprimanded.  I don't take my Editor's responsibilities lightly, and if she can't step up to the job, well, I'll just have to find someone that will.  <Sigh>  A parrot's work is never done.

oopppsss...so sorry Mr. Editor in Chief! I'll try to behave myself now... wow..I must say that U did a great job at supervising both your Male and Female pets...
I am even venturing to say that they did a mighty great job with all that...that....wallpaper they dare dhanging up walls! That's absurd isn't?? Where in the world to your pets live to be able to do such insane thing??? *rolling my eyes*....LOL

Ok...back on track...lol...Darlene i absolutly LOVEE your damask looking wallpaper...it is lovely and very elegant looking and I love your floors....I understand the reason why they were covered before but I hope U get to keep them in their natural state now...
Beautiful job indeed...and your ink pads shelves are priceless an very unique...definelty a treasure!
Thanks for sharing some laughter (good for the soul!) and all the beautiful pictures too...my favorite one is the one where there is 's'thing lil and blue' and ohh so cuteeee perched on top of a box!! ♥

OMG!!! FUN, FUN, FUN POST!!! Love it, Darlene!
Your room is going to look fabulous and it's coming along great!!!
Lynn

This is such a great post--just made me smile!

I too love the wallpaper and it will be such a wonderful room when completed. I sure hope the male and female pets get some time to work on it this weekend!

This just cracks me up... what a hoot!

TOO Cute!! Put a HUGE smile on my face. Cant wait to see the finished project, Looks like it's goingt to be a perfect crafty space.
Hugs Laura

Love how Bijou was such a good "supervisor"!!

Dar;ene - the room really looks like it will be a great craft room!!

What a great space this will be when you are done! I'm glad that you have a supervisor. I will send Mia over for decorating! Lol

LOLOL what a splendid post! Bijou-tifully reported! I'm LOLing huge at this report and he did a stand up job showing off the new craft room! What a nice space - perhaps Buddy and Buster can join the festivities and really vamp things up! It is going to be so be sooo nice when it's finished! Congrats! x0x0

What a clever and fun post to read! loved it! How exciting to get a room re-do!

Oh my goodness...I think you are in the wrong profession Bijou...you shouldn't be a supervisor...you should be a published writer...how clever you are and funny too...I do however love your female pets choice of wallpaper...it is absolutely stunning and I think you will too once she gets the male pet to help her finish the project...(good thing you didn't get misted...lol)...I can't wait to see the finished space...and give you female pet a hug for me will ya??...she's a very special female pet.....

You are so funny- I loved your narrating! Glad the male and female got to it and did such a great job redecorating and all..... Are you all organized? Fun, fun!