A Hoot of a Mystery!

I'm lucky enough to be a member (a tardy one!) on Split Coast that does a "Mystery Swap" every other month.  One of us chooses an image, stamps off sets for the members and sends it to the current hostess.

When the current hostess swaps out returns from the current round, these "Mystery Images" are included in the returns.  All participants make cards with these Mystery Images and then send them back to her.  Lather, rinse, repeat.  It never ceases to amaze me how differently we all create when we begin with the same image!

Blah, blah, blah...ok...to the point:  April was our hostess for Round 18 of the Mystery Image Swap and she chose "A Hoot of a Day" by Unity.  Here's what I came up with: 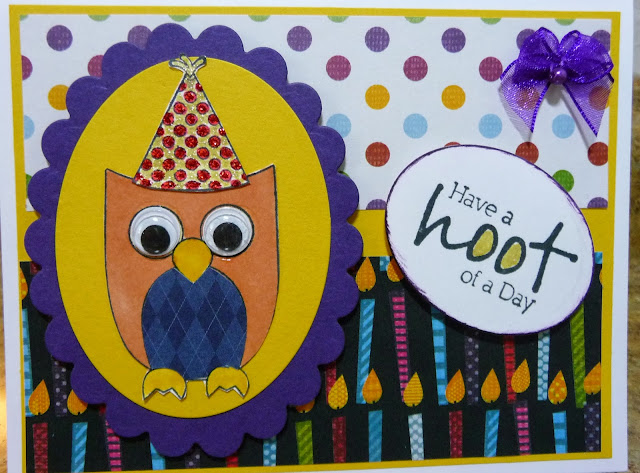 Isn't that just the cutest owl every?  His little vest was paper pieced from scraps, and the 2 DP panels were from my scraps as well. 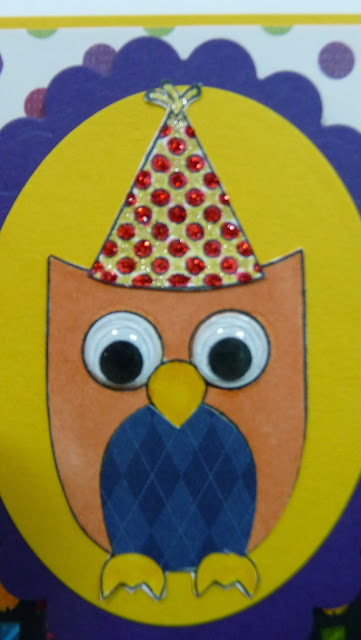 Here's a closer look at the little guy.  His hat has been spiffed up with red stickles and a gold Spica pen.  Then it was glued on top of the image.

I have a stash of small googly eyes that fit the image as if made for it!  He's colored with Spectrum Noir markers. Another strip of some scrap paper was added to the inside, leaving enough room to write a personal message.

I hope that the others like what April's adorable image became in my hands!

April, thank you for such a cute and fun image for September's round!  And a BIG thank you for my little gift in my return!  April loves lighthouses, and made a little framed picture of a D. Morgan lighthouse image and sent it to me!  It's so pretty, her coloring is wonderful.  This weekend I'll take a picture of it and post it here for all of you to admire.

Thank you for stopping by, and for leaving me some comments.  They truly are a delight for me to read.
Posted by Darlene at Thursday, October 03, 2013

Aww this is so cute Darlene - love this little guy with his wonderful eyes :-)
Blessings
Maxine

Darlene, I love the paper piecing and the wiggly eyes give this fun little guy so much character!

awww your owl turned up soooooooooooo adorableeee Darlene!
You are a real master with all kind of feathers friends....either real or paper wise...*wink*
Love loveeeeee your paper piecing and feet fussy cutting too....and of course how you did the eyes...(wink wink!!)♥

Oh my goodness, Darlene! This card is sooooooooooooo cute!!!

Yes, the owl is very cute and I love your coloring and layout. I love doing swaps like this. So fun.

Ooh...your owl is such a cutie! I love your paper choices and great coloring!
Hugs,
Marsha

Wonderful card- love the bling and the eyes are a great accent. What fun fun DP- love the B-day candles and the fun Polka Dots!

Super cute card! What a hoot!

Adorable card Darlene. So glad you got your blog back up and running.