A group on Split Coast has a "Mystery Image Swap", where each of us takes a turn at hosting.  The hostess selects the image and stamps off sets to send to each participant.  We each make 4 cards with the image and send it back.  The hostess swaps out the cards, returning 3 cards made by the other members and the images from the next hostess to be completed for the next round.

It's great fun to see what image we get to work with and also to see the wide variety of cards made with the same starting point!  This round is hosted by my good friend, Carol, and she chose really fun image from A/I, "Selma and Gladys". 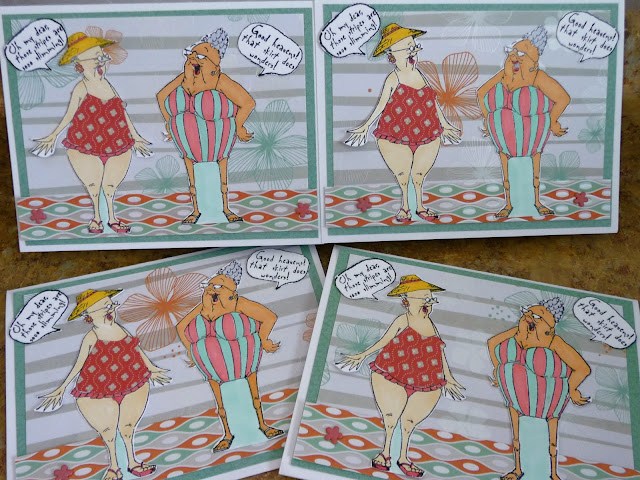 Aren't they a hoot?  Here's a closer look: 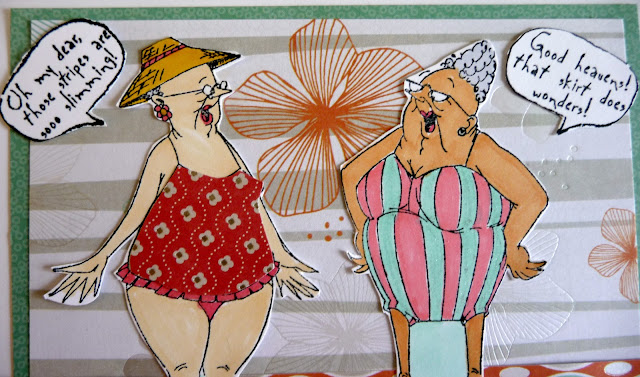 The image was colored with Spectrum Noir markers and the red swim suit was paper pieced.  All paper came from an SEI pack: "On the Coast".  Although it doesn't show up in the photos, shimmer was added to their earrings and the aqua stripes of the other swim suit by using a Clear Spica glitter pen.  It's one image but I cut each one out to play around with placing them on the card. 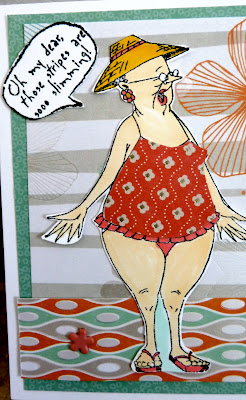 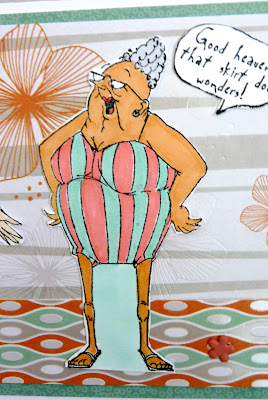 Two close ups of the gals.  They really crack me up, I kept giggling while making these cards, eventually hubby wandered in to see what I was up to!


Here's the inside of the card: 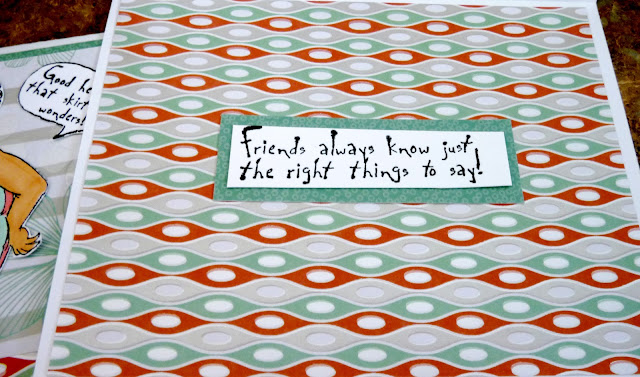 Thanks Carol!  Your choice was fun and it sure was great to play with colors and a theme of warmth and beaches during the winter-without-end!  (Yes, it's snowing again!)

I'm trying to decide which one of these gals I look like!!!!!!!
PRECIOUS card!!!
Lynn

Oh come on now, Lynn, there's just NO WAY you look like either of these gals! (thank heavens!)

Your cards are great Darlene! I love the paper pieced swim suit! What a great idea!!

Love the papers you used too!!

Great job this round with some really fun images!!

I really like the papers and colors you chose to work with! The cards are funny and cute as can be!

What a fun pair - you have really made them look great. Love your use of the sentiments too.
Blessings
Maxine

Awesome Cards Darlene--I love the paper piercing! Great colors and these ladies sure put a smile on my face!

Cute background papers! I love the tropical feel of your cards :)

Love the wave pattern on the design paper. This pair is so fun and I have enjoyed all the cards I have seen made with them.

Yeahhh for such FUN image! Leave it to Carol to make us almost pee in our pants! LOL You did agreat job with the Ladies...wow...how did u manage to paper piece even?? Too darn cute....love the calming pastels colors too...Great job!;o)

Those ladies are such fun... and so is your card, Darlene. I can't believe you cut them out - a time intensive labor! Fun card!!!

I LOVE this image and the funny sentiments! Love your colors- fab card!!!

And these cards are even more aweome in real life... I'm so lucky to be able to keep one....woohoo....great job Darlene.