Hello world - I'm back!
I felt the need to get away from the demands of my humans. So I booked a retreat with THE BEST Bird Human on the planet - Joanne.  Her spa is the greatest: movies in the recreation room, luxurious outdoor retreats, the food is to die for, and the clientele is VERY fun.  Yep, just what I needed for some R & R!

While there I became acquainted with several residents:
Murphy is a Lovebird and Cisco is the best parakeet I've ever met!  What a riot he is!!  Murphy was so excited to see me, just kept head bobbing at my female when I was being dropped off. (They had to chauffeur me.  Cabs were scarce that night). 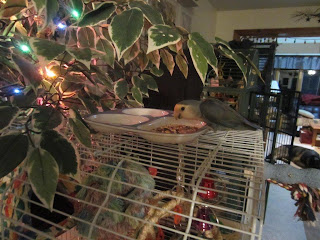 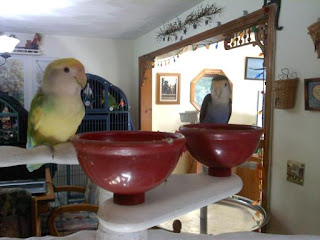 Murphy and I after breakfast one morning. He's such a handsome devil! 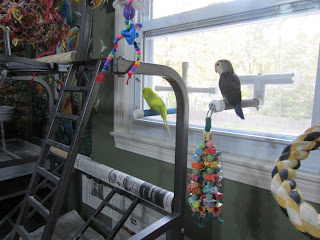 Cisco & I hanging in the Rec Room 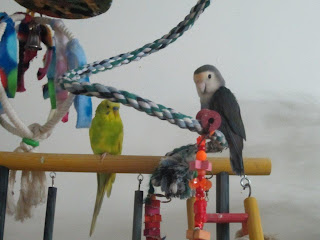 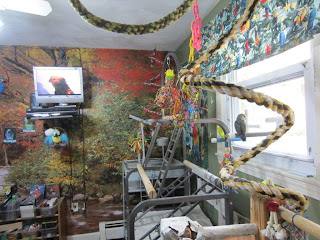 Ahhh, nothing like an afternoon at the movies to relax a fella!
Much to my delight, my inter-species skills came in handy and Justice and I were soon having a ball.  Literally. I mean, after all, he's only a dog (but pretty darn smart for just being a dog).  He couldn't quite get how to play fetch with me but he did freely offer his toys, so you have to give him credit for that!  Justice likes to rile up the smaller dogs and regularly gets them going.  He's really gentle and we became good friends.
Cisco showed me the ins and outs of the spa, sharing all of his favorite spots.  We would watch the world from a sunny window, or hang out in the outdoor retreat, or get a workout in the Rec room.  Friday night was movie night and that was great fun too. 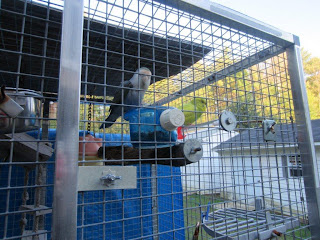 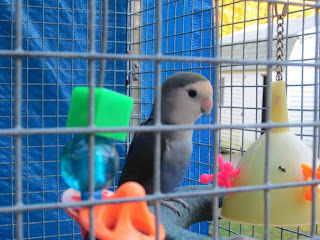 After a good workout, the staff pampered us with a shower. 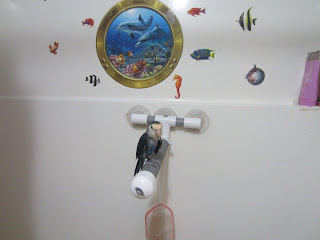 All in all, it was a very relaxing break from the ordinary chores of keeping my humans happy.  I mean, a bird does need to get spoiled every now and again - right?